This is the fourth and final story in our ‘DRV Love Stories’ series – highlighting true love stories from the Dow Rummel community.

Marge and Gene Seiler first met when they were seniors in high school; Marge attended Beresford and Gene was in Centerville. Marge recalls one of their first dates and said, “This was a time when gas was rationed and Gene’s dad was a little hesitant to loan him the car to drive to Beresford.” Gene’s dad did end up lending Gene that car and Marge adds, “I have always been grateful for that.” Their first date was at a Nickelodeon dance…and the rest is history!

After graduating High School, Gene enlisted in the US Army Air Corps.  He was a tail gunner member of the B-24 crew that specialized in radar training and went on to become members of the 485th Snoopers.  Gene was discharged in 1946 and married Marge on June 14th, 1947.  Gene graduated in 1950 with an electrical engineering degree.  Marge has many memories of this time as his work brought them to numerous places.  Among the many California is one that holds a special place in her heart.  Marge shares, “At that time California was a great place to raise our three boys. I remember us all sitting down and talking about how we would celebrate the holidays. We all agreed that we would keep our family traditions and celebrate our Norwegian side of the family on Christmas eve, (lutefisk and all) and the Swedish side on Christmas day. A tradition our boys still carry on the on with their families.”

When retired, Marge and Gene moved back to SD for a number of years before moving into Dow Rummel Village in 2011.  “Upon the move, there were so many couples who welcomed you in and made you feel at home from day one. You can’t find that just anywhere these days,” she said. Marge also shared how much Gene cherished his friendships with some of the gentlemen at Dow Rummel and how much it meant to him to have folks that he could relate to.

When asked if she had any advice to offer, Marge replied, “I remember a time when Gene was in the Health Care Center and I went down to see him like I did every day. Gene said, ‘I don’t think we have ever had a fight.’.”  Marge went on to explain that although they might have some ‘discussions’, the couple never argued and never went to bed mad.

Thanks for sharing your story with us, Marge! 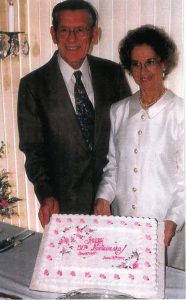 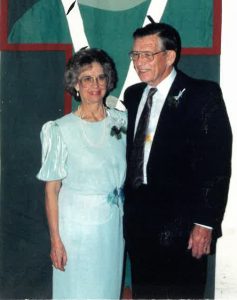 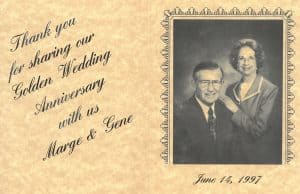 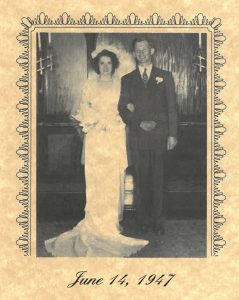 As a precaution for COVID-19, Dow Rummel is currently enforcing limited visitation for the safety of our residents.  Learn More